With a professional quartet of singers at services, regular concerts in the Church, three outstanding pipe organs, a Steinway B grand piano and its use for recording sessions and broadcasts, music is a major part of the life of the Church. Since 1992 this church has been the headquarters of a major movement to recruit and train organists; lessons and classes in organ playing for all ages continue here throughout the year.

The Director of Music

Anne has been Director of Music at St Giles' since 1980. She founded St. Giles International Organ School in 1992 and directed it until January 2012 when it became part of the education programme of RCO Academy. For many years she also directed the annual RCO Academy Summer Course for Organists in the City of London which regularly attracted 60-75 students from around the world. She is widely known for her work as organ teacher, concert organist and church musician. Her concert and teaching work has taken her to the USA, Japan, Europe and all over the UK, and she has made several commercial recordings. She has written and edited many books for organists, published by Oxford University Press, Cramer Music and the Royal School of Church Music. She has wide experience of examining grade examinations and diplomas. As well as teaching students of all standards, Anne enjoys training organ teachers.

Elizabeth was educated in Scotland and attended Dundee University where she read mathematics as well holding the post of Assistant Organist of Dundee Cathedral. After graduating she trained as a primary school teacher and has taught in schools in Dundee, Edinburgh and Switzerland.

Whilst working in Edinburgh, she started taking organ lessons with Anne Marsden Thomas.  She has given many solo recitals including at Oxford Town Hall, St Giles' Cathedral, Edinburgh, and Lichfield Cathedral as well as at several churches in London.

She lives in South London with her husband and daughter.

Maranatha is currently an A-level student at City of London School for Girls and has been studying the organ with Anne Marsden Thomas since she began learning at the age of 12. Maranatha will be pursuing Maths at university but hopes to become an organ scholar to continue her music. She recently achieved a distinction in her Grade 8 ABRSM exam. Aside from the organ, Maranatha is also a pianist and oboist, taking part in many events at her school in orchestra and various instrumental groups. She is eager to join the St Giles community and very much looking forward to all the learning opportunities.

Maranatha leaves us today after a year as our Organ Scholar. Anne thanked Maranatha after the 10am Eucharist and wished her well with her future plans. She presented Maranatha with a signed card and cheque for £290 donated by members of the congregation.

Penny was born in Tasmania where she trained at the Conservatorium. After singing in the Lyric Opera Company, Brisbane, she joined the Song Company (an a capella ensemble specialising in early and contemporary music) in Sydney. With the Song Company she was involved in festivals, concerts, recordings, children's concerts and live broadcasts on national radio, plus tours of South Korea and New Zealand and throughout Australia. Currently she earns a regular salary working in market research, primarily in wine and spirits, while taking professional singing engagements on a part-time basis. Her clear, warm voice is supported by a flawless technique and perfect intonation

Amanda began singing in choirs as a          child, conducted by Ronald Corp and Ralph Allwood.  She read Music at Cambridge University where she was a choral scholar at Trinity College.

Since then she has sung mostly contemporary classical music. Stage projects include roles in Stockhausen’s Mittwoch as part of 2012’s Cultural Olympiad (with helicopters and a camel) and Birtwistle’s The Minotaur for the Royal Opera House (drenched in stage blood). Amanda continues to enjoy ensemble and choral singing. She has sung on many film soundtracks with London Voices, including several of the Star Wars and Harry Potter films.

Amanda also has a qualification in tax, and about half her working time is spent writing about tax, and preparing tax returns for clients working in the arts. She is happy with either a music score or the latest tax legislation. She also composes when she has time (so not very much) and runs a girls’ choir at a local school.

Amanda is an impeccable sight-reader and instantly adapts her vocal quality to whatever repertoire she is singing, whether it is Palestrina, McDowall, or anything in between.

Robin studied voice and horn for a year at the Royal College of Music before reading maths at Oxford University. Whilst at Oxford he sang and played with all the major university choirs and orchestras, and continued to sing with the choir of St Mary the Virgin (the University church) until taking up his post at St Giles.

Solo engagements have included Evangelist in Bach’s Passions, Mendelssohn’s Elijah and Britten’s Serenade, Nocturne and St Nicolas, as well as Strauss’s 2nd Horn Concerto and Bach’s Brandenburg Concerto No.1. He was recently invited to take part in a public masterclass on Mahler songs with the Oxford University Orchestra, taken by Ian Bostridge. He currently studies with Ann de Renais. Robin has an extraordinary dynamic range throughout his wide vocal compass.

Louis was the Winner of the Audience Prize at the Fulham Opera Robert Presley Memorial Verdi Prize 2019 and a Finalist for the Wagner Society of England's Singing Competition. Selected to participate in ENO’s Opera Works Programme and with British Youth Opera.

Mancunian-born Louis gained his MMus with Distinction from the RNCM. His studies were made possible by the generous support of Michael Oglesby, the Drapers Guild, and the Musician's Benevolent Fund.

There are three organs at St Giles'.  The grand organ and the chancel organ are in the body of the church; the practice organ is in the vestry.

The Grand Organ, mounted on a gallery, has three manuals, a radiating/concave pedalboard, mechanical action, 39 speaking stops, balanced Swell pedal and a full range of modern accessories including a sequencer. This organ is ideal for solo work, and for accompanying musicians in the west gallery. Organ history: Jordan & Bridge 1733, Willis 1872, Jones 1902, Mander 1970. It was cleaned and restored in Autumn 2008.

Mechanical action to manuals and pedals, with electrical stop action and electrical assistance on Swell to Great.

The chancel organ was installed 2008, has two manuals, a straight/concave pedalboard, mechanical action, 15 speaking stops, a balanced Swell pedal and a full range of modern accessories including generals and a stepper. This organ is ideal for accompanying musicians on the large chancel, to which it is adjacent.  There are unique carvings on the woodwork

Great to Pedal
Swell to Pedal

Mechanical action to all departments

Organ by Kenneth Tickell 2008 situated in the church office. For the exclusive use of students of Royal College of Organists Acredited Teachers. Please email AMT@organschool.com for details of how to book and pay for practice on this organ.

DISABLED-FRIENDLY FEATURES
A single ridge on the stop shank to identify the Principal stop by touch.
An adjustable bench with an exceptionally wide range of positions.

The Steinway B Grand Piano

We have a beautiful and well-maintained Steinway B Grand Piano.  If you would like to use this piano please contact the parish administrator, Jake Kirner. 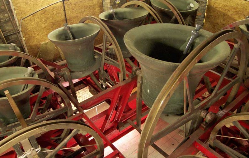 There is a ring of twelve bells hung for change ringing with a tenor weighing 34cwt and tuned to C-sharp. They are augmented by a sharp-second which provides a light ring of eight, tenor 11cwt in G-sharp. Full details of these bells, and their predecessors, are published at St. Giles' Cripplegate Ringing is arranged by the Ancient Society of College Youths and details are on their website ASCY. Visiting ringers are very welcome. To arrange a visit please contact the Tower Secretary Richard Pullin grandsirerich@googlemail.com

The old bells of St. Giles’ were destroyed in a WW2 incendiary raid on the 29th. December 1940. The cracked remnants lay at the bottom of the tower until 1949 when the war was over, and they could be moved    Whitechapel Foundry workers with the surviving bells and metal in 1949.

In 1954 a completely new ring of twelve bells was installed in the tower.

After more than sixty years moving parts are wearing out and must be replaced before they break. Three bells were leaking grease from their bearings which is a sign of a severely worn or even a cracked gudgeon. “What are gudgeons?” PCC members asked when the bell ringers requested permission and financial support for replacement.  An explanation that “they are metal pins from which a bell hangs and which rotate in bearings mounted on a frame attached to the tower walls” did not convey much information. The following labelled picture of a bell would have helped.

If a gudgeon breaks the bell will fall, smashing into its wheel or frame. Where it lands is unpredictable and how much damage it does on the way equally so. Look again at the bells in the post-war photograph above!

Convinced that the work was necessary the PCC agreed to pay half of the bill and the rest was funded by a grant from the Ancient Society of College Youths (ASCY) (www.ascy.org.uk).

Work commenced in November 2017 when the three bells were lowered to the belfry floor, their wheels were removed and the headstocks with gudgeons and bearings attached were winched to the church floor for transit to Whites of Appleton (www.whitesbellhangers.co.uk). Six weeks later the process was reversed. Bright blue headstocks with brand new gudgeons and bearings were winched back up the tower and the three bells rehung.

The work was done by a team of volunteers, all ringers, including members of the Middlesex Association Spanner Club (http://www.bellringing.london/) and St. Giles’ own steeple keeper, Terry Streeter. They were led by James Haseldine one of the Whites’ Bell Hangers.

Headstock (blue) being lowered into place above the 8th. bell after being winched on chains from the church floor.

With thanks to all involved especially the PCC and ASCY for funding and the volunteer bell hangers for several days’ hard labour.

Where to visit us:- 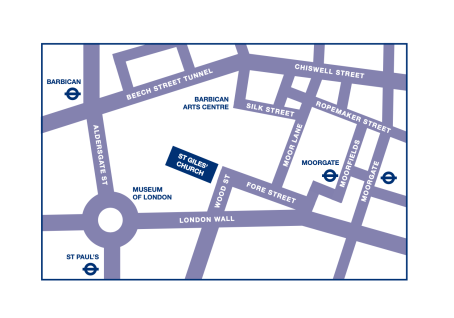 The next session will be on 7 September

The church is open for private prayer

The church is open from 11.00-16.00 Monday-Friday for private prayer. Please observe social distancing and any other instructions required when visiting the church.

Private Prayer and Reflection on  first Thursday of the month from 13.00-13.30

You are invited to join others in church on Thursday 7 July.

If you are not able to join us, we hope you will continue to pray with us wherever you are.

The Parish Office will be closed 10-25 August

as Jake is away. Please contact Jack if you have an urgent enquiry: rector@stgileschurch.com or  07765 771 547